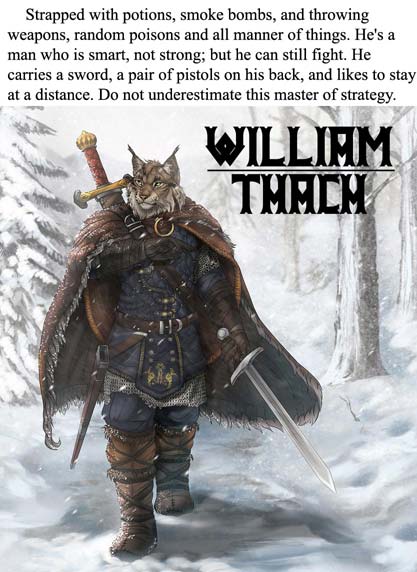 Character Name: William Thach Glover
Nicknames: The Dark Emperor
Class/Race: Human
Gender: Male
Age: ?
Appearance: Tall and broad, he often takes on different looks in order to avoid detection.
Personality: Malevolent and pathological, Thach will do anything to get what he wants.
Likes: Science, the taste of different creatures blood
Dislikes: Humans, weakness, holding onto the past
Background: A man who once loved his feline wife and son, but was willing to kill his bride in order to gain a powerful blood magic. He hates himself for what he has done, but would do it all again in a heartbeat. He developed a mutagen to take away his humanity and make him a lynx like his dead wife. He tested it first on his son, and it failed. Now he hates his son as much as he hates the world, and seeks to control the realm through use of his mutagen, science, and political powers.